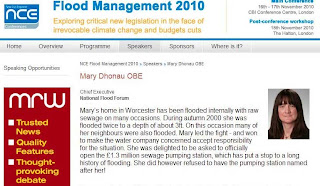 Neil Cook an insurance broker who specialises in obtaining insurance for people in flood effected areas of the UK has sent us the following information about Mary Dhonau OBE. Mary spoke at the New Civil Engineer’s Flood Management conference 2010 and below is the background information about her

Mary’s home in Worcester has been flooded internally with raw sewage on many occasions. During autumn 2000 she was flooded twice to a depth of about 3ft. On this occasion many of her neighbours were also flooded. Mary led the fight - and won to make the water company concerned accept responsibility for the situation. She was delighted to be asked to officially open the £1.3 million sewage pumping station, which has put a stop to a long history of flooding. She did however refused to have the pumping station named after her!

Mary went on to form ‘Worcester Action Against Flooding’ which has an excellent working relationship with the E/A, Severn Trent Water and the Local Authority. As a result of this close partnership, Worcester was selected and successfully trialled a temporary defence, the kite marked geo-design barrier This first saved homes and businesses from Flooding in February 2004 and kept a main access road into Worcester open. Hylton Rd in Worcester is now protected by an earth bund which was paid for with local levy funding.

Originally Mary was the community group’s director and has been the chief executive for 4 years. Mary has made many appearances on national TV and radio representing the ‘flooded community’ and through TV has been able to promote ‘flood awareness’ and ‘self help’ She has been a studio guest amongst others on BBC Breakfast News, GMTV, ITV’s ‘This Morning’ News night and even the ‘Richard and Judy Show’ (!) During a flood Mary regularly speaks on national TV and radio talking about just what it’s like to be flooded and giving advice on how to manage the initial effects of being flooded.

Mary is responsible for facilitating the NFF national conference~ a unique event Which gives an equal platform to those who manage flood risk and those who are at risk of flooding. She is also editor of the quarterly NFF newsletter. Mary is a regular speaker at flood risk conferences and keeps the plight of the flood victim high on the political agenda. She also promotes the use of ‘flood resistance (protection) and flood resilience’. Mary was the driving force behind the much acclaimed ‘blue pages’~ the leading directory of flood protection products and services. She was also co author of the joint ABI/NFF guidance of repairing a home following a flood. Mary has acted as a witness to Sir Michael Pitt who conducted the independent review of the 2007 floods and to the EFRA committee, the Welsh sustainably committee and to several local authority scrutiny’s into the 2007 floods including that of Gloucester.

She was invited to represent the NFF at 2 ‘floods summits’ organized by Hilary Benn following the publication of the Pitt report. And was a keynote speaker at the Defra 2010 conference Mary also represented the community voice at the government led ‘insurance flood summit in autumn 2010. Mary was part of the consortium to review the literature for resistance and resilience advice with CIRIA and Wolverhampton University. Mary is on the steering committee for Exercise Watermark, the Cabinet office steering group for community resilience, she represents the NFF at the joint Defra/EA stakeholder group and has worked with Defra promoting the householder flood protection grants.

Mary is a firm believer in ‘partnership working’ and continues to encourage all those effected by flooding (whether as a victim or as an Agency that manages flood risk) to work together managing flood risk. Mary was awarded an OBE for services to the environment in the Queen’s birthday honours list of 2009.