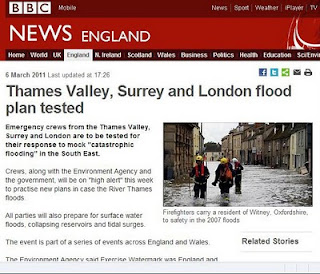 According to media reports in the last couple of days "Emergency crews from the Thames Valley, Surrey and London are to be tested for their response to mock "catastrophic flooding" in the South East." Similar flood tests under Exercise Watermark will take place in areas that could be affected by flooding in England and Wales.

In Garforth, Leeds - Residents will be putting their community flood plan into action next week as part of a large-scale emergency flood exercise across England and Wales according to a report from the Environment Agency.

Garforth has a long history of flooding problems, particularly with local drainage systems which are unable to cope with large storms. After the severe flooding in June 2007, residents decided to write their own plan of how they could work together during a flood.

The group’s founder and treasurer, Jacky Simpson, said: “With support from Leeds City Council and the Environment Agency, we have worked hard to develop our Flood Plan. We have divided Garforth up into eight areas which we know are vulnerable to flooding.

“My role, along with the other Flood Wardens, is to liaise with these authorities and pass on information about potential flooding problems to the sub-warden in the relevant areas.

“They can then use the information to alert homeowners and businesses in their communities. We were conscious that we had not yet used the Flood Plan – so with Exercise Watermark happening, it seemed an ideal opportunity to have a ‘dry run’.

The trial will involve the group receiving simulated weather and flooding information from the Environment Agency and Leeds City Council, and then using this to test their call-out procedures and actions.

This includes alerting vulnerable residents and installing flood protection products, such as door guards or airbrick covers, which have been provided to some properties through a government grant scheme.

Environment Agency community officer Graham Lindsey said: “We’re really pleased that the Garforth committee is testing its flood plan. We will be rigorously testing our own procedures during Exercise Watermark, but this exercise is equally a chance for individuals, community groups, schools and businesses to think about how they would respond.

“In a major flood, the emergency responders may not be able to help everyone affected, and any assistance may take a while to arrive. Therefore it is essential that people know whether they could be affected by flooding, know how to stay safe and have a plan in place.”

In Norfolk Police, fire, local authorities, health representatives and other partner agencies in Norfolk, together with the Environment Agency, will be exercising the county’s response to river and coastal flooding on Wednesday 9 and Thursday 10 March.

The exercise, called "Watermark", is a nationwide flooding exercise that looks at the country’s preparedness against a range of flooding scenarios. Thousands of people from government departments, agencies, emergency responders and communities are taking part in one of the biggest emergency exercises ever to take place in the UK.

Norfolk’s County Council Resilience Manager, John Ellis said: “One in six properties in England and Wales is at risk of flooding. It is only by working and practising together that we will be ready to protect people’s lives, homes and livelihoods when flooding hits.

Members of the public will be able to visit the Thames Barrier site on Thursday 10 March to take part in a flood awareness day and to witness the monthly Thames Barrier test closure.

There will be a marquee with staffed displays on flood warning and informing, maintenance and reliability, taking action and planning for the future. We will also show people how we build a sandbag wall and will demonstrate a demountable defence.

A local primary school, Lowther Primary School, which is at risk of flooding, will also be visiting. We have invited a number of local MPs, local authority Chief Executives, councillors and climate change representatives. Representatives from the London Fire Service are also planning to attend in a fire engine and to demonstrate a high volume water pump. Members of the Woolwich Riversides Safer Neighbourhoods team, part of Metropolitan Police, will also be attending.

Do you live in area that is in a flood risk Zone? Are you worried about being able to get insurance? Find out more at http://www.jml-insurance.co.uk/types.php?id=81&sec=1