Floods and flood in rented property 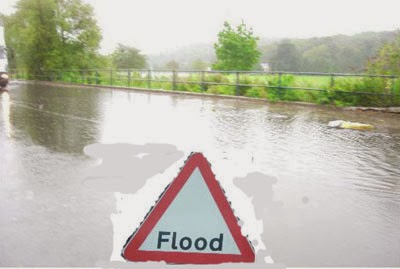 We are nearly at the end of January and the various reports about flooding in Britain and on the other side of the channel are not drying up.

On Friday The Riviera Times that covers part of the south of France and Monaco reported that  devastating floods had washed out the Provence Alpes Côte d'Azur,

"In Nice, a total of 220mm fell between 9am on the 16th January and midnight on the 20th January, nearly three times the average 74mm for the whole month. La Londe recorded more than 200mm of rain - a two month average. Floods in Roquebrune came close to the levels recorded in 2011, surpassing that of 2008."

The area around Menton was one of the worst affected by landslides, and the city has estimated the cost of damage to public infrastructure at 4.5 million euros, while Nice Metropolis made a first estimate of six million euros. The clean-up bill in the Var is even more significant where specifically Hyères, La Londe, Le Lavandou and Pierrefeu. In La Londe, which has a population of 10,000, no less than 600 homes were damaged in the floods. " More on this here

On Saturday the latest edition of "Landlord & Buy-to-Let" magazine arrived in the post. It's cover had a photo of what looks like a house sinking in the sea. Moving onto the relevant article there were two headlines - " Government flood insurance plans leave landlords high and dry" and Boston letting agent battles recent flooding"

The lady from Belvoir Lettings in Lincolnshire has had first hand experience of the recent flood problems.Donna Burrell reports that her company had several rental homes that were flooded. She end her story saying that "Specialist insurance is vitally important and I hope more people will consider taking this out to get peace of mind and ensure that their families are taken care of in the case of an emergency".

Going back to the Landlord & Buy-to-Let magazine the report was saying that Ministers' plans to ensure flood insurance is widely available will not extend to private rented accommodation which will leave landlords and tenants in flood affected areas vulnerable.

The article then goes on to quote the RLA - Residential Landlords Association which is seeking urgent clarification from the Government on this issue.

At the end of the day there is no getting away from flooding problems and each year it is getting worse.

If you have a property in a location like the south of France for example and are not too fluent in French and need your insurance written in English and to be able to talk through your concerns with an English speaking person then take a look at insurance provided by Andrew Copeland International, Intasure Insurance or Staysure Insurance. Find out more Here

Somehow this won't be the last time that flooding is going to be mentioned on this blog this winter.

Posted by Philip Suter at 09:42 No comments:

This rather cold looking car was on an email from Staysure Insurance. Fortunately we have been spared this type of covering for cars this January in the south east of England.

1. Check your tyres
Tyres should have at least 3mm of tread for safe winter motoring. If you can afford it, change to winter tyres – the higher silica content prevents tyres from hardening at lower temperatures and gives greater grip.

2. Look after your battery
Your battery comes under a lot of stress during the winter so turn off non-essential electrics such as radio and lights before you turn your engine off. This will take the strain off your battery when you go to start your car again.

3. Your survival kit
Keep some essentials in the boot of your car, just in case of emergency. Handy items include a shovel, blanket, torch, wellingtons or walking boots, water, and extra fuel if possible.

4. Driving in snow and ice
Stopping distances are 10 times longer in ice and snow – gentle manoeuvres are key to driving safely. Give yourself plenty of space and drive at a constant speed avoiding harsh breaking.
If you find you need to suddenly brake on the ice and end up skidding, pump your brakes rather than applying continuous pressure. This will stop your wheels from locking up and be more effective in stopping. 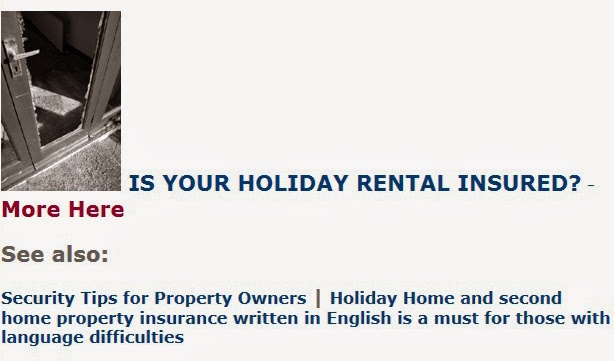 Received and e-letter from "The Riviera Times" in the south of France yesterday.

The catching headline was "Robberies remain high on the Côte"

According to the report "While the number of burglaries on the Côte d’Azur may have dropped by a third over the past 10 years, latest statistics reveal that it is still a major problem with 20 a day reported in the Alpes Maritimes and 15 in the Var.

Published by crime statistics body ONDRP (Observatoire National de la Délinquance et de la réponse penale), the report highlights all the initiatives taken to combat the phenomenon, although the effect they have is not always consistent. " See full story here

So the start of 2014 is an ideal time to make sure a) you have adequate security on your holiday home property and b) to review the insurance.

For many people the problems of dealing with an insurance company that does not communicate in their native language is rather frustrating. The jml Property Insurance site has several specialist insurance companies who are based in the UK, but can cover the property insurance is many European countries outside the UK.

Don't let your property be added to the wrong statistics list this year and if it is unfortunately, ensure you have adequate insurance.
Posted by Philip Suter at 04:23 No comments:

Plenty of flooding in UK, but Environment Agency to cut hundreds of jobs

At the same time as flood warning have been going out over the last few hours, the BBC reported earlier that "The Environment Agency has confirmed that jobs in flood protection in England will be cut as part of a major restructuring of the organisation. About 1,500 jobs are to be lost at the agency although it is not clear how many flood-related posts will go."

At the same time more flooding is occurring as there are high tides, especially in south west England. It will be interesting to see what happens with the job cuts at The Environment Agency. Anyway they do have plenty of useful information on their website

Over the past few years the jml Insurance sites have gathered an amount of information including flood defence equipment here .

For many people, the fact that insurance companies are not wanting their business is of great concern. There are some of course who will try and assist. Visit this page for more information.

Talking of Rentguard Insurance - they covered a story from the Residential landlords Association (RLA). on the media pages "Government flood bill should include landlords, says RLA"

"The Government is not doing enough to help landlords and tenants in flood affected areas, say the Residential landlords Association (RLA).

The complaint comes on the back of news that the government’s plans to ensure flood insurance is widely available do not extend to the private rental sector.

With the east coast of England recently facing some of the worst flooding in over half a century, the RLA is seeking clarifications over the bill currently going through parliament.


The “Flood Re” scheme aims to ensure that flood insurance remains affordable and available to homeowners at high risk of flooding. It was previously believed that private landlords would be included in the schemes, however recent government consultation concluded that properties would be excluded where the owner does not reside in it.

The Government document explains that properties eligible must be “used for residential purposes; have an individual premium; and be occupied by the policyholder, or their immediate family.”

RLA policy director Richard Jones has now written to the environment secretary Owen Paterson MP seeking urgent clarification on the matter, saying: “This is an extremely disturbing development and poses significant threats to the on-going viability of those areas where there is a significant risk of flooding. Insurance may not be obtainable at all or only obtainable on prohibitive terms. It could place landlords in breach of the terms of their mortgages.”

“The Government is looking to support private rented housing but this will have the opposite effect.” he adds."

Posted by Philip Suter at 07:28 No comments: