More flooding in the south of France 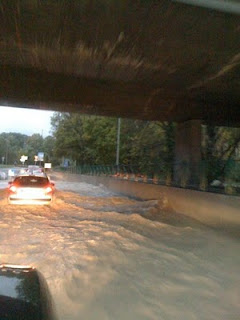 Heavy rain has hit the south of France again this weekend as illustrated in the picture on the left. The occupants of the car were able to procced through this flood because they had a 4X4.

Today 1st November, Nice Matin reported that 50 inhabitants at Villeneuve-Loubet were evacuated because of the risk of flooding. Part of Cagnes sur Mer was also affected.

The A8 exit for Villeneuve Loubet (47) has had to be closed.

According to the Riviera Radio website "Authorities are surveying the banks of the rivers Loup and Cagne. In the Grasse area, six properties have been cut off on the chemin du Pilon de la Malle by a landslide. Several hundred tonnes of mud have fallen onto the road and residents have no landline telephones.

The official Meteo France Orange Weather Alert passed at 6 am this morning but more rain is forecast for this evening and tomorrow across the Alpes Maritimes and the Var. Meanwhile, the torrential rainfall on the coast over the past 24 hours has been accompanied by abundant snowfall inland."

The area has had a lot of flood and sea storm damage this year starting on the 1st January, then later on the 4th May and June when flash floods killed at least 19 people.

If you own a property in the south of France do make sure you have proper insurance cover. A policy written in English is a bonus if you are not fluent in French and you can find out more about insurance from Andrew Copeland International and Intasure by visiting this site Here

Of course flooding also occurs on a regular basis in England. If you need to contact a specialist insurance company contact Equity and General Insurance by following this link here

I found your blog very informative about insurance.

Please one more post about that. I wonder how you got so good. This is really a fascinating blog, lots of stuff that I can get into. One thing I just want to say is that your Blog is so perfect. Engineers auto insurance discount