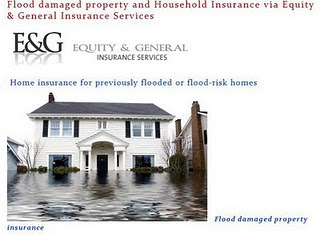 On the 17th November 2010, the day that Cornwall has experienced severe flooding, Neil an insurance brooker who specialises in assisting those with properties in flood areas has sent this information:

If you have been flooded you can expect to see your insurance premiums hiked by 500 % and excess costs loaded by around £5,000.

That’s one of the findings of a survey carried out by the National Flood Forum following the floods of 2007 and 2009. Too many people dealing with insurance companies is more traumatic than the flood itself.


Loss adjusters were slated for being hard to get hold of and not answering calls. In one case a loss adjuster was based in the United States and knew nothing about the UK. Another was flown in from Norway. Builders also came in for a panning for bringing in unskilled sub-contractors.


AXA, Aviva and the Halifax were most criticised for raising premiums and one in ten of the 295 households canvassed on-line had flood insurance excluded from renewal quotes. But, over half of the households said they would stay with their existing insurer.


Mary Dhonau, chief executive of the NFF said: “Some of the stories are heart-wrenching. We need to look at better ways of handling the trauma flooding causes to families and the insurance and building industry need to get their acts together.”

She said the insurance industry resisted supporting flood resilient options when repairing flooded homes, even though many owners said they would pay for the work.


“Raising electrical sockets is one of the simpler solutions,” said Ms Dhonau, “but one in five families were either forbidden to make improvements or told not to bother. And only a few that did saw any drop in their premiums”


Ms Dhonau said the NFF would challenge the insurance industry to develop a longer term strategy. “Insurers shy away from increasing pay-outs to improve flood defences as people are free to change insurers after a year, so there is no guarantee of a payback.


“If insurers offered policies of 18 months and longer, we believe everyone could benefit and four out of five people in our survey agreed,” she said.


Respondents from across the country completed the survey with the majority of people living in Worcestershire, the East Riding, Cumbria and Oxfordshire-Berkshire. The summary of findings is available in PDF format to download here
To find out more about insurance for flood damage property contact Neil Here

More than 100 homes have been evacuated after floods and gale-force winds caused disruption across Cornwall. People were trapped in their cars and homes by the rising floodwaters, which reached up to 6ft (2m) deep in places. St Blazey, St Austell, Mevagissey and Lostwithiel were the worst hit areas. The Met Office said a further 10mm (0.4in) of rain could fall overnight.