A complete rebranding of ARLA and NAEA? 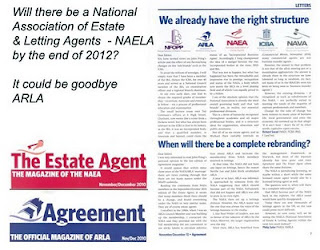 I was very interested to read John Pring’s personal opinion in the Sept/Oct 2010 edition of Agreement.

It would appear that within some three years of the NAEA / ARLA “Marriage” there are views coming through that there are too many names under the NFOPP umbrella.

Reading the comments from NAEA members in the Sept/ Oct 2010 edition of the Estate Agent it seems that many members think there should be a change to branding everything under the NAEA or very similar, they are of course estate agents.

I recollect in the 1980’s when I was an ARLA Council Member and was building up the membership, I contacted the NAEA and they provided me with the full membership list (on convenient to use sticky labels) to circulate information about ARLA and increase the membership from NAEA members involved in lettings. At that time the NAEA did not have any input on lettings hence the reason Neville Lee and John Birch established ARLA.

A year or so later ARLA was informally approached by someone from the NAEA suggesting that ARLA should become part of the NAEA. Fortunately that did not happen and ARLA was able to grow in its own rights. The NAEA then set up a lettings division, however the ARLA name was the one that was always the voice of the lettings business in the media.

I like, Paul Weller of Leaders was not in favour of the takeover of ARLA by the NAEA, however the larger organisation won the day. Since then ARLA has benefited from the management framework in Warwick, but most of the separate identity has now gone and even Agreement and The Estate Agent often share the same features. The NAEA is introducing licensing so maybe within a short while the same licensed estate agent would also be a licensed letting agent as well.

The question now is when will there be a complete re-branding? Had ARLA become part of the NAEA back in the eighties the ARLA name would have quickly disappeared. Today there are now thousands of lettings agents in the UK so the task could prove more difficult, however to save costs, will we be seeing the NAELA (National Association of Estate & Letting Agents) within in the next two years instead?

It is interesting to see in the same Agreement magazine as my letter that there is a feature on Paul Weller, Managing Director of Leaders letting agents. Paul now runs one of the largest letting agents groups in the UK. A business his late father in law Neville Lee established in the early 1980's after establishing ARLA with John Birch.

I met Neville on several occasions and am not sure if he would have been too happy about ARLA under the NAEA's umbrella. His son in law Paul certainly is not and the article in Agreement says "Weller is a long-term ARLA member, but not an uncritical one. He opposed the merger with the NAEA, putting himself up as the 'no'proxy vote, meaning that members who were opposed to the merger but who could not attend the vote could vote through him.

In the event, one third of ARLA members voted against the merger, and Weller says he believes that were it to be put to the vote again now more would be against it.

He does remain the ARLA fold: However, we do evaluate it every year and look at the benefits he says. One difficulty is that over the years we have drummed into the staff all the pluses of ARLA membership and so it would be very difficult to reverse that culture. However, we are no longer putting staff through Technical Awards, but doing our own training courses"."

I personally have found the "New ARLA" far too bureaucratic and that is a great shame being involved in the UK letting business for more than 30 years.