The effects of the Property Market in Dublin 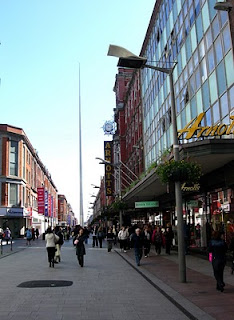 Concerns of the future of Arnotts, one of Ireland's oldest department stores.
It has been reported late last week the Dublin department store Arnotts (pictured left) has had the Anglo Irish Bank and Ulster Bank moving in to take control of it. The store employes 950 employees in Henry Sreet, Dublin and the banks are the backers of "Arnotts Northern Quarter Development". This has been put on hold because of the economic situation in Ireland.

The Northern Quarter Development was a €750 million project on 5.5 acres of land in Dublin city centre that was unveilled in 2006.

There are apparently €250 million of loans from this project and the banks are intending taking control of the company.The company's troubles stem from an investment of €10m (£8m) on its new Arnotts Project shop in the Jervis Street shopping centre, which was intended to house the department store while the Northern Quarter was being built. It paid €5m to break its lease in the shopping centre this year.

Arnotts was established in 1843 by George Cannock and Andrew White. In 1993 the company celebrated its 150th anniversary. In the 1970s it was a Member of the ISA - The Independent Store Association a group of independent department stores in the UK and Ireland who bought products collectivelly and sold them under the Czarina trade brand.

Thinking of visiting Ireland for a short break? Find self catering accommodation at www.jmlvillas.com