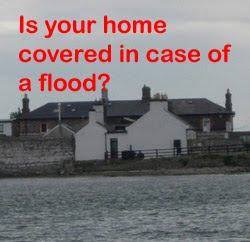 With flooding in France, Spain Portugal very much in the news in the last few hours, the UK too has suffered a great deal in the last few years. The following is a report from an individual who had his house at Morpeth in Northumberland, England flooded on September 6, 2008 in exceptionally prolonged torrential rainfall. He had only changed his insurance company in January of that year.

The claim for restoration came to £96,000. Though he felt this was high, had little control over it and was on the whole very satisfied with the service given by the Loss Adjuster, Surveyor & the builders.

The insurance cover on the property was renewed on 16 January 2009, with the premium for house and contents increased from £216 to £398, including an excess of £2500 for flooding. The tone of the letter accompanying the renewal notice was reassuring, though he realised they had no option as the claim was ongoing at renewal date.

This person was therefore shocked when he received a letter of 10th December 2009 saying that this insurance company would not be renewing the cover as “the value of the claim no longer comes within the underwriting criteria for our low risk policy – apologies for any inconvenience caused”.

He contacted a local solicitor who advised him to check whether his insurer was a member of The Association of British Insurers and if so, to ask why they had withdrawn cover when the Statement of Principles agreed between the ABI & the Government says it should not be. Unfortunately, neither the insurer nor the underwriters are listed as members.

I obtained a report from the Environment Agency giving flood risk information for the area in which his house lies, which classified it as “Significant – greater than 1 in 75 chance in any year”. Since then, they have announced measures to reduce the risk to 1:115, to be implemented between 2011 and 2013.

Armed with this report, he contacted his bank, where he is a “Premium” customer and obtained a quote from another insurance provider. The cover would cost £1443 per annum with no mention yet how much the excess would be. He had to provide further information such as the EA report, before they could confirm cover. The reaction of the bank’s customer service manager speaks for itself - “disgusting”. He owns a modest 2 Bedroom terraced house.

He received a telephone call from a company that his original insurance provider had told them about his situation. He then gave them full details of the house, flooding history, claim etc. and they asked him to state how far was his property from the river, it’s height above the river level and to give details of the existing flood defences (there is a wall approx. 4 metres high). He heard nothing further and felt uneasy as they had contacted him and didn’t pursue it.

The Christmas holidays were approaching, when businesses would close down and naturally he was panicking – it would soon be January 16th and would he even be able to get insurance, or sell the house in the future? He felt really distressed as it was all happening again.

He found the JML site that referred him to Neil Cook the head of specialist risks at Equity GI insurance Brokers. Neil is actively campaigning for people like him who are having difficulties obtaining flood cover. To cut a long story short, he has found him affordable cover, £643 pa, with a flooding excess of £2500, on condition that he take steps to protect areas where water got into the house.

He had to install “Smart” airbricks, which keep water out and 2 good quality steel flood barriers for the front and back doors, which can be put in place in a short time, in fact he had by this time intended to do this anyway.

The door frames had to be modified to accommodate the barriers but a reliable local builder who had done his neighbour’s restoration did this. It cost well over £1000 altogether but has given him peace of mind – well, as much as can be expected.

The whole episode has been extremely stressful – He suffers from intermittent anxiety and depression and has had to resume drug treatment. He does of course realise that as he chooses to live in an area with a more than average flood risk, but what are people living in such areas to do? They cannot all move lock stock and barrel to a lesser risk area - someone has to live in these properties.

He appreciates it may cost more but feel it is unreasonable for insurance companies to hold people to ransom am grateful to this head of specialist risks he was put in contact with and others who are fighting to remove the stigma existing at present with flood victims. That is what they are and they have not done nothing wrong.

More information on Flood Damaged Property insurance providers can be found at http://www.jml-insurance.co.uk/types.php?id=81&sec=1
Posted by Philip Suter at 00:54

Nice post, I would like to request you to one more post about that Keep it up and thanks for the useful information. Home Insurance Discount

This could be one specific with the most beneficial blogs Key west claim adjuster We have ever arrive across on this subject. Really Wonderful. I’m also an expert in this topic so I can understand your hard work.

I’ve desired to post about something similar to this on one of my blogs and this has given me an idea. Panama Claim Adjusters Cool Mat.