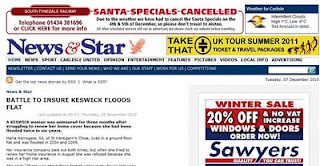 Neil Cook an insurance broker, spotted this article in the "News & Star" on the 25th November 2010.
"Battle to insure Keswick floods flat"

A Keswick woman was uninsured for three months after struggling to renew her home cover because she had been flooded twice in six years.

Her insurance company paid out both times, but when she tried to renew her home insurance in August she was refused because she was in a high risk area.

She said: “There was about three feet of water in my house last year and I lost everything.

“I walked out with medication under one arm and my dog under the other.

“It was like someone coming into your house and wiping out your life.

“Since I was told I couldn't renew I rang everyone in the Yellow Pages trying to get cover.”

Maria was eventually given the number of Rugby insurance firm Equity and General Insurance Services and her prayers were finally answered.

She was told they could insure her if she got a flood guard fitted to a patio door.

The firm put her in touch with Flood Master Limited which gave a guard free.

The insurers then arranged for the guard to be fitted by a local company and decided to match Flood Master’s generosity by giving Maria a year’s free insurance.

Maria said: “It was the best Christmas present anyone could have given me and I can’t praise the two companies enough.”

Have your say........on the News & Star Blog: no this was genuine the reporter will gladly supply my contact details we are truly helping flood victims no stunts just true help- Posted by neil cook on 2 December 2010 at 12:28