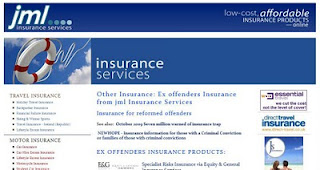 Story of an ex-offender who had difficulty obtaining insurance.

My son convicted of section 18 assault when he was just 19 years old. Whilst out one Friday night in a local pub a man celebrating the local football derby, a rugby player who by his own admission had 13 pints of alcohol during the day started a fight with my son’s friend. My son tried to help his friend who was punched in the face and who was about to be punched again. My son punched him, knocked him to the floor (or he may have fallen in a drunken stupor). My son says he was afraid if the man got up he would really hurt him as this man was so much bigger so my son kicked him to stop him getting up.

This man did attend A&E after the event but he had no substantial injuries and was released after being seen. His medical records noted that he was aggressive in A&E but the court put that down to the pain he was suffering. My son pleaded not guilty as he was defending his friend. When he faced the judge and jurors he was frightened and did not fare well when being questioned. He was made to look like a young lager lout, with no self control. Not a young lad out with his friends and me having a few pints on a Friday night. My son wasn’t drunk he had four pints. The man who started the fight was older and spoke well on the stand as he sipped his water and made out like he had done nothing wrong. He came off worst on this occasion but was known to be a bully and a trouble causer.

This was the first time my son had a prison sentence and he pleaded not guilty as he didn’t feel that he was. The judge said ‘he was making an example of my son’ as lager louts had to be punished. Politically this was a time when the government were campaigning to stop binge drinking and street fights. My son was a political tool. He was sentenced to four years in prison.


It was devastating for him and for all of us. He served the sentence first in a closed prison and then for the last ten months in an open prison as his good behaviour was recognised and rewarded. He was approached by the prison officers to talk to and to help new prisoners to settle when they arrived.


Since his release he has had self employed work. He found this work himself. It appears to me that there is little assistance for people who come out of prison. The probation officers see them once a week initially but offer no help when it comes to finding a job or managing to re-establish themselves into society after being locked away for so long. This was a difficult and heart breaking time. Seeing someone with low self esteem but trying so hard to find work and consistently being turned away because of the prison record.

When he found himself a job in construction/suspended ceilings (with a family member) he required public insurance liability. It took some time to find him that cover as he had a criminal record. On searching the internet and making numerous phone calls I eventually found cover at a cost of over £300 as opposed to the £50 quotes for someone without a previous prison sentence. There was a £95 charge for the introduction to get the insurance required to enable my son to work.

Can you imagine just out of prison, no income other then Job seekers allowance, low self esteem and trying to fit back into the life you left, application forms for jobs thrown in the bin whilst you stand there trying to get work and then when finding work through sheer determination a huge fee is charged.

It has been a hard slog for him and for his family as we supported him through all of this. Then came the recession and no work, as things are picking up and he has again managed to find himself work he needed public liability insurance. I searched the internet, rang many places and I was fortunate enough to find the number for Neil Cook, Head of Specialist Risks, at Equity and General Insurance Services Ltd.

Neil has been marvellous, so helpful and, understanding of the situation. He has managed to organise public liability insurance at the cost of £105. The service provided was not only affordable, it was brilliant. Neil also advised about my house insurance, as I didn’t realise that since my son has come to live at home although I have been paying insurance premiums I would not have been covered as I have not informed the insurance company I have an x convict in my house.

I find it all ridiculous, so much for serving a sentence and paying a debt to society. It is a never ending debt that penalises the person convicted and family members. It is hardly surprising that statistics show over 70% of offenders re-offend and end up back in prison there is so little help for them and everything costs more. Thank goodness for people like Neil and the company he works with who are actually helping people like my son and I.

Source: Client of Neil Cook - Published here with the consent of the writer and Neil Cook

If you looking for ex-offenders insurance please visit this page: http://www.jml-insurance.co.uk/types.php?id=83&sec=16

Dear Philip, Thank you so much for this! A young man in my church has a broken past and has a criminal record. But 5 years ago he put his faith in Jesus & his life has been turned around. He just wants to bless people. He works on the housing estate where I am a pastor. He's started his own business as a glazier: "Good News Glazing". But can he get PLI? You're joking, no-one will touch him... until we read your article. You've given him hope. Thanks and God bless you!

This is a good common sense Blog. Very helpful to one who is just finding the resources about this part. It will certainly help educate me.

I hope you have a nice day! Very good article, well written and very thought out. I am looking forward to reading more of your posts in the future.