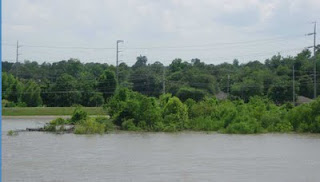 (Left: The height of the Mississipi River just outside New Orleans in late May 2011 photo jml Property services)

There has been very serious flooding in Memphis, a southern US city in the state of Tennessee this week. According to media reports, the Mississippi River has peaked at just under 48ft / 14.6m.


Last week a relative was driving through Graceland, the famous home of rock and roll legend Elvis Presley and there was a great deal of rain when he was in the area.

Heavy winters in the upper midwest and an extremely wet April – with 600% more rain than normal in some southern states – have turned 2011 into a season of floods along the Mississippi’s 2,320-mile route.There were tremendous snowfalls in the Rockies last December. When the snow melted, the water flowed into the rivers that drain into the Mississippi.

After this all the clearing up has to be done. Sounds like floods in the Tewkesbury area in 2007....but on a much larger scale.

If you live in the UK or Ireland and want more information on insurance for flood effected property, Visit http://www.jml-property-insurance.co.uk/Flood_Insurance_jml.htm

How come the flood prone, accident area haven't got any precautionary infrastructures yet? Tsk tsk...