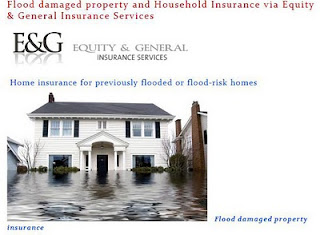 Insurance expert Neil Cook of Equity and General Insurance Services helped a lady in Ulverston who had been flooded.

She lives in a typical terraced house and the brokers were able to arrange to insure her for less than £500.

She mentioned that her neighbour had received a renewal quotation of £8,000 for a similar sized house and another neighbour £18,000.


How can a normal family possibly afford to pay such a vast percentage of their annual income in insurance?

Neil Cook is rather concerned by this Association of British Insurers / ABI report:


"More than half a million homes in England could be ineligible for home insurance unless action is taken to protect them against flooding, the insurance industry warned today. The Association of British Insurers (ABI) warned that its members could stop offering flood protection as standard on all home insurance policies, in a report published a year after thousands of homes in Hull were hit by flooding.

The report stated insurers could not commit to covering all the homes identified by the Environment Agency as being at significant risk of flooding, over 517,000 of them, unless the government announced plans for them to be adequately defended.

The ABI added that without government action and stricter enforcement of planning controls to prevent new homes being built on flood plains, some properties could become “uninsurable, unsaleable and uninhabitable”. It was also stated that last year’s floods in Hull and Gloucester led to 180,000 claims for flood-damaged homes, businesses and vehicles, and that its members had dealt with four years’ worth of claims in two months.

More than 17,000 policyholders were put up in temporary accommodation and a total of £3bn was paid out in claims.

Statistics regarding some of those living in the flood-hit areas found eight out of 10 thought the danger of flooding was increasing, while three-quarters did not think enough was being done to tackle the problem. Improving drainage was seen as a top priority for 98% of people, followed by tougher planning controls for new homes. Three-quarters of people believed the government’s target of 3m new homes by 2020 should be reduced if it would lead to more homes being at risk of flooding.

Nick Starling, the ABI’s director of general insurance and health, said: “These findings reinforce our call for a long-term flood management strategy.
“In particular, we must tackle the problem of surface water drainage. Planning for the future is essential if we are to minimise a repeat of last year’s terrible floods, and to ensure that flood insurance protection remains widely available.”

A spokesman for the government’s communities and local government department said: “If councils properly use the tough new planning rules we have put in place to protect new homes against flood risk, which includes consulting the Environment Agency, it will ensure that all homes are safe from flooding and sustainable for the future – effective surface water drainage and flood defences must also be part of new housing infrastructure.”
Source ABI"

You may find that a local flood action group may not help you that much either but a solution is possible if you now were to ask.

Help is at hand for anyone who has been flooded or even those in flood zones you don’t have to pay ridiculous premiums or vast flood excesses or even go without flood cover, when our flood insurance expert will too offer you affordable cover from LLOYDS OF LONDON without too much complication just because major insurers say you cannot get cover its not the case you do not have to suffer.

Please do tell us how badly your insurers have treated you we would honestly like to hear from anyone who has been quoted a vast premium and or excess.