Mr Bean at Goodwood - Hope he had adequate insurance? 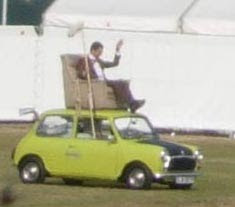 Mr Bean was at the Goodwood Revival meeting yesterday taking part in the 50th anniversary of the mini. I hope he had adequate insurance as he did not look too safe in his armchair avove his mini.
Rowan Atkinson who plays the part of Mr Bean did not race yesterday, however the mini was well celebrated with girls in mini skirts dancing by minis, a parade of minis and The St Mary’s Trophy race featuring minis.

The race was won by Nick Swift in a Morris Mini Cooper S.
The other major celebration was a Tribute to Sir Stirling Moss who celebrated his 80th birthday
last Thursday (17th September).
More on this here
Posted by Philip Suter at 05:30