Reducing the flood risk in Chesterfield - work has started 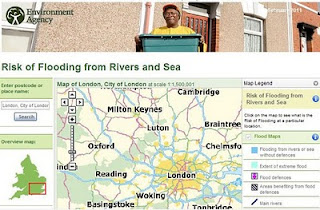 The Environment Agency has announced that "Work begins to reduce the risk of flooding in Chesterfield".

They have said that "Trees and blockages in the river that could cause flooding to properties in Chesterfield are being removed by the Environment Agency.

Work has started on a stretch of the River Hipper from Walton Fields to where the river joins the River Rother. The clearance is one of a series of activities planned to reduce the risk of flooding in Chesterfield.

Riverside trees, branches and other vegetation can cause flooding if they fall into the watercourse and get stuck under bridges. Debris can build up behind them and create an obstruction or dam that holds back water. This can then lead to flooding of properties and land.

The area previously flooded in June 2007 and there have been several occasions where the water levels have been high since then.

Jonathan Moxon from the Environment Agency’s operations delivery team said: “Maintenance of the River Hipper is an essential part of our flood reduction work.

“We will be working on the first phase of work until the end of March. We have been working with our in-house biodiversity team to make sure we don’t disturb habitats for species such as brown trout, crayfish, otters and bats. The maintenance has been split into two phases so that the we don’t interfere with the bird nesting season.

“We will take a break whilst the birds are nesting and continue in August. Anything that could impact on spawning trout will also be carried out in the second phase which will finish in October.

“Once the trees and debris have been removed, we will plant low-growing vegetation to improve the biodiversity of the area. We will also remove any invasive non-native plants such as Japanese Knotweed, Giant Hogweed and Himalayan Balsam that we find.

“When we have finished, the river channel will be in a more manageable state, water will flow more easily and birds and aquatic wildlife will also benefit from the diverse habitat conditions.”

Routine maintenance by the Environment Agency’s in-house workforce has also been planned for this year upstream of Walton Field Road to the Haddon Close area.

Jonathan said: “As part of our future plans for the River Hipper, we are looking into creating a river stewardship. Over the coming months we will be discussing this with a wide range of interested organisations.”

For the next phase of the project the Environment Agency will continue to work with the community and partner organisations including Chesterfield Borough Council to develop long term flood maintenance plans."

Do you live in area that has been flooded or likely to be flooded and are looking for insurance cover from a specialist insurance broker? Then you need to vist the T R Youngs page at http://www.jml-insurance.co.uk/displayproduct.php?id=259&sec=1