Homes could be hit with a 'flood tax' 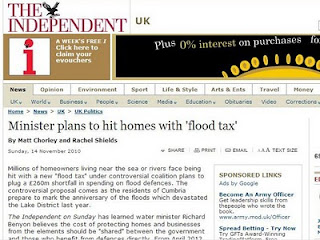 On the anniversary of the flooding in Cumbria last November and in the same week that there has been flooding in Cornwall, The Independent ran a story on Sunday 14th November 2010 -"Minister plans to hit homes with 'flood tax'"

"The Independent on Sunday has learned water minister Richard Benyon believes the cost of protecting homes and businesses from the elements should be "shared" between the government and those who benefit from defences directly. From April 2012, the government wants to see a new structure in place which combines public and private funding."

"In return for paying the levy – which would be on top of higher insurance premiums already imposed on flood risk areas - local communities would get a greater say in which areas are protected."