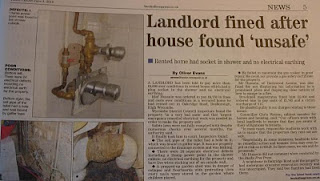 I don't often buy the Bucks Free Press, however I did last Friday, June 4th 10 and spotted this report "Landlord fined after house found "unfafe"

According to this worrying report Itlaf Hussain was ordered to pay £6,758 in fines and costs over the condiion in a terrace house in Oakridge Road, High Wycombe, Bucks that he had let out.

A neighbour said the property had undergone extensive renovation and was unoccupied. Apparently two families had lived there.