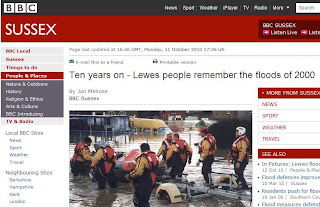 Following extensive flooding of Lewes in 2000, the Sussex Ouse Flood Management Strategy was published in August 2002. The Strategy included a recommendation to provide flood protection to the town of Lewes. The Strategy considered Lewes to be comprised of several areas, known as flood cells, as shown in Figure 1. The economic justification for various standards of flood protection was considered for each of these flood cells.

Since 2000, millions of pounds has been spent on defences by the Environment Agency , but when heavy rain is predicted people still cast a wary eye at the River Ouse.

It's great to see a blog of this quality. I learned a lot of new things and I'm looking forward to see more like this. Thank you. Teenager auto insurance