Weddings are being under insured 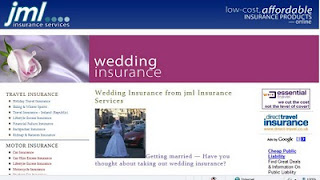 According to their site "We were shocked to discover that, on average, it would appear that couples buying wedding insurance are underinsuring their weddings by 30 percent!

While it’s great that so many couples are taking out wedding insurance to provide financial protection for their big day, it’s alarming that so many are underinsuring themselves by such an amount. Should the unthinkable happen and a couple find themselves forced to cancel or postpone their wedding, they may find themselves significantly out of pocket, despite thinking they were financially covered.

There are, of course, a few explanations for this shortfall. It could be the case that couples ultimately spend way more than their initial budget and don’t increase their insurance cover accordingly. Or, they simply don’t insure themselves for the full amount, gambling that they won’t actually need to claim for full cancellation or postponement.

Our wedding insurance comparison table lists many of the UK’s major providers of wedding insurance. It can be sorted by both premium and cancellation cover, helping to find not only a policy that’s value for money, but one that also meets the total wedding budget to be insured."

If you are planning on getting married soon or later take a look at www.insuranceweddings.co.uk or visit the specialist page at http://www.jml-insurance.co.uk/types.php?id=14&sec=11 and get a quote from companies like Weddingplan, Debenhams or MRL