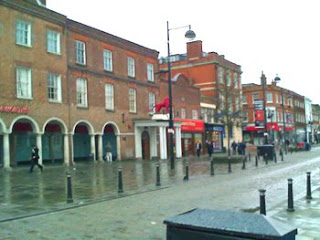 I read in The Guardian this week a feature entitled "Love hotels for lean times". The report is about hotels in places like Paris, Osaka Japan, New York, Barcelona, Vienna and other cities who have rooms that can be rented for just a few hours. The article is explaining that Valentines day is at a time when you are still paying off your credit card after Christmas and New Year expenditure. Here is a cheaper way of spending Valentines day (or part of it!).

So in the High Street High Wycombe stands the former Woolworths store that finally closed earlier this month. It had been there since 1969 and of course up until the early 1960's the famous Red Lion Hotel was there. The hotel’s iconic red lion statue, a major High Wycombe landmark, still stands on the colonnade outside the store.

Here is the answer to the empty building. Turn it back into a hotel again and as we are now in the credit crunch era take into account what these hotels in The Guardian article are doing. Well if that doesn't happen maybe Iceland might move in!

Whatever happens, if you are going travelling, even for a romantic weekend, don't forget your travel insurance. jml Insurance acts as introducers to Endsleigh, Essential Travel, Direct Travel, Devon Direct, Simple and Staysure Travel insurance. Insurance is one essential you can't afford to be without today.
Posted by Philip Suter at 10:15